I first visited Berlin in March 2005. I knew absolutely nothing about the city. I was on my own but I knew one person and we agreed to meet up in Prenzlauer Berg – Berlin’s coolest district, back then.

I may have mis-remembered it but the friend told me to find a place called (I think) Red Cafe on what was (I think) Kastanienallee. It really doesn’t sound like Kastanienallee (even in 2005) but wherever it was, I remember a street with a squatty/alternative feel – lots of crumbly buildings, graffiti and banners hanging from balconies. It looked kinda cool, I have to admit.

Inside the bar, I found my friend and took a seat. I prefer to avoid familiar beer brands when I’m somewhere new and asked what beer I should try. She held up a bottle of Sternburg Export and said, “Just buy Sternburg. It’s as good as the others but cheaper.”

That’s what I did. When the barman took the beer out of the fridge, I had a moment to notice the white on red star on the bottle-top before he whipped it off with his opener. That seemed kinda cool too and it tasted good to me. 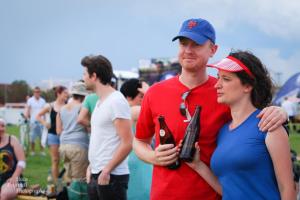 Kirst and I with a couple of Sterni’s at the Slowlympics.

Seven years on, I’m still enjoying Sternburg. You don’t see it on sale in bars anymore but it costs around 45 cents for a 500ml bottle from a supermarket (not including the 8 cent refundable pfand/deposit). So including the deposit, that’s around 42p – and for that kind of money, it’s great.

It’s not the only beer I drink and it’s certainly not the best in the world. I like trying lots of different types and there a loads in Germany. Back in the UK, I’m always happy to see a pub with a selection of real ales. If I’m going have a drink at home, I’ll often buy a few wheat beers, or perhaps a schwarzbier before happily moving on to Sternburg Exports. But sometimes, the wheat beer and schwarzbier are made by Sternburg too.

The thing is, I can’t see anything wrong with drinking Sternburg. Nothing at all. But there’s a stigma to it and I’m suspicious as to why. True – it’s the drink of choice for the city’s drunks. But drunks use the U-Bahn too and I don’t let that affect how I get around.

On one fairly big summer night out, I did a Späti run (a trip to the off licence) and bought a bag full of Sternburg Export. Someone in our group mentioned that they don’t drink Sternburg. When I asked why, they came up with a pretty unconvincing answer.

“It tastes okay at first, but after a few, you start to feel really full and a bit sick.”

To me, that just sounded like how it feels to drink beer. They could’ve added “…and it makes you want to wee more often too.”

On another day out with friends, again, I bought Sternburg and a different friend said, “Sternburg? Don’t you want a beer you can actually taste?”

Say what you like about Sternburg, but nobody can call it tasteless. And believe me I’ve had more than my fair share of tasteless, pissy, fizzy beers at gigs, festivals and events. Sternburg is better than those and it has been brewed according to the Reinheitsgebot (the same German purity laws that all the more prestigious brands abide by) for 190 years. I found just one beer review site that includes Sternburg Export – it scores around 3.3 out of 5. Not amazing, but not many beers score more than four on that particular site and cost/value isn’t part of the rating.

Sternburg goes back a long way. All the way back to 1278 according to the Sternburg page on Wikipedia. Sternburg properly started in 1822 when it was bought in by Maximillian Speck. A year later, Sternburg was being brewed in the cellar of a castle in Leipzig and selling 300,000 litres per year.

Information sheet for an Interflug’s iL-62. Picture sourced from http://www.interflug.biz.

After WWII and as part of the GDR, Sternburg became a state-owned brewery and exported beer to the Soviet Union and all over the Eastern Bloc. It was also served onboard East Germany’s national airline, Interflug.

After re-unification, Sternburg’s Export and Pilsner varieties were launched and Sternburg became the first East German brewery to achieve EU quality assurance standards (DIN ISO 9002, if you must know). Around this time, Sternburg adopted a no-advertising policy and became a ‘discount’ brand.

Oh, and in 2011, Sternburg became the first German beer in space. Seriously. See below.

The no-advertising thing is particularly interesting. Most of us feel like we’re far too sophisticated and intelligent to be too influenced by advertising. But of course, we’re not. I’m subject to it, we all are. So much of what’s considered cool is just what advertising tells us is cool. And companies spend an awful lot of money doing it – money that has to be re-couped somewhere.

So, is this the source of the Sternburg stigma? Is it that we don’t see cool people drinking Sternburg on billboards, TV or via cooler underground advertising avenues? Or is it that the people choosing other beers really do have have more discerning palates than I do?

Either way, I’m going to continue drinking Sternburg Export as my favourite Späti tipple. I’m no beer connoisseur so I’m not going to pay extra for tastes I don’t have.

But finally, I’m grateful to Sternburg for another reason: it goes hand in hand with my Berlin experience and I love it for that. Berlin may not be the be the prettiest city in the world and Sternburg isn’t the best beer, but you don’t need a fortune to enjoy either of them. So, Prost: to Sternburg and Sternburg drinkers everywhere!

11 comments on “The Sternburg stigma”